Enough with the electricity for a while.  The Docs put me on a break for a couple of weeks, then I go in next week for a review to see what to do next.

Lets talk about vinyl today.  I am old enough to remember when Vinyl Recordings were the primary, best and coolest way to listen to music. There is a subset of people who still think that way. People still hunt for obscure copies of records that are floating around out there. I decided that here in Austin, we need a way to put some interesting stuff out.  So, I found this: 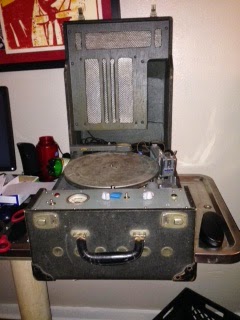 PRESTO Record Lathe
so that The DAM DOG RANCH can start putting out limited edition vinyl recordings. The idea is we will put a song or two on one side, then screen art on the other side. We will then have limited edition recordings with cool art...yeah, I'm repeating myself there but my memory is still fucking with me, so we get what we get here.

We have yet to record anything yet and I expect it's gonna take a couple of attempts to pull it off, luckily I have lots of guinea pigs willing to give it a shot. Attempt number one will be with Jon Dee Graham at the Continental Club. We are gonna record at least a couple of songs of "The Fighting Cocks" and a couple of songs of Will Graham's band "The Painted Redstarts" . Then we will see where it goes from there.  The first singles off of The DAM DOG RANCH will absolutely be of the Graham variety. They will be limited edition and pretty damn special if I do say so myself...