I carry a little black book (I call her Fallacy, Fal for short) in the back left pocket of my jeans a great majority of the time. It sits back there with a Pilot G-2 07,

this world renowned gel pen clips into my pocket on the left side, snug against Fal. This has been going on, the carrying part ever since I got out of the 5 month inpatient program I was in for my crazy/drunkard issues.  Fal has actually been in my possession since January of this year, which means she was with me for the last couple of months of said stay. I assume I carried her around during that time period as well, just don't remember. I'm assuming it was in the pocket on the scrub type tops we wore.

A black and white version of this comic strip has been cut out and taped into the back.

I would tell you the creator but cut the name of the funnies (my grandmother's term for the comics in the newspaper) off and when I googled "alligator playing a trombone", the guy that posted the above pic did the same thing. Anyway, the premise is brilliant. 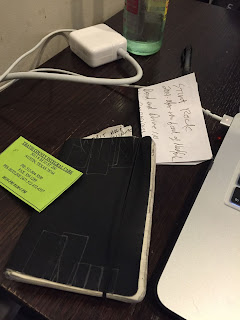 Fal is pretty beat up, there is lots of tape holding together, I have to retie the elastic holding her together a couple of times so that she is now bowed and  even when the elastic is undone, she will not lie flat. There are bits of paper and folded up napkins stuck inside. One piece of paper has a bunch of random movie titles written on it...

STUNT ROCK
2019: AFTER THE FALL OF NEW YORK
DEAD END DRIVE IN
NEW BARBARIANS
NEVER TOO YOUNG TO DIE

...the other side of that same bit of scratch are instructions on how to lead a Dharma Punx session.
I don't remember writing either one of these notes. I chaired the Dharma Punx meetings in August, so that is an easy one to figure out. I finally
figured out that it is probably an order ticket from The Alamo Drafthouse so I must have been writing down stuff from the previews before the previews that show at the Alamo. All of those movies are very obscure trash 'em bash 'em types that came out post the first Mad Max.  Hence, it was probably one of the many times I went to see by far the best god damn movie that has come out this year, Mad Max: FURY ROAD... 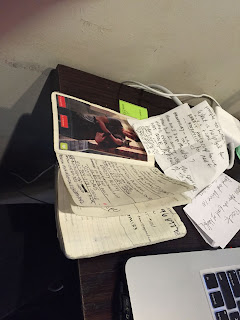 Fal's front has a picture of my dear friend D holding what appears to be a psychotic cat (aren't they all?).  At the bottom are taped the following phrases: "it happened" and "to remember", there is also a little heart taped there. D is one of the people I will be attempting to write about in more detail later. She killed herself in the hovel (my apartment) where she was holding down the fort while I was inpatient. She is one of the ghosts who haunts me. But really, she can haunt all she wants, she is a benevolent ghost...we love you D. 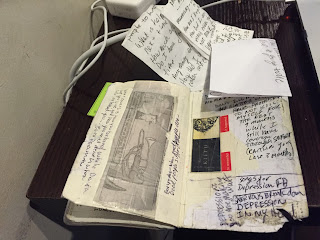 at the other end is the trumpet playing alligator comic and a small pic of K with the same phrases that the pic of D have. K is another ghost, we love you too K...there is also a promise that I made to one of my counselors that says I will not kill my self, no matter what for the duration that I have some kind of coverage through the facility I was in. (this is an ongoing pact I have with the Gnome)

There is also a quote from Euripides:

also, this quote from Edith Perlman:

"What counts is how you behaved while Death let you live, and how you met Death when life released you."

elsewhere in the book are lists...one has about 30 different meds that I have been on over the years. Another has a list of suicide attempts: slit wrists, couple of strangulation/hangings, multiple overdoses (intentional and otherwise: as in, it would be absolutely fine if I just don't wake up) and the last most serious involving lots to ETOH, medications, and carbon monoxide. There is another quote that says:

"I want to drift away in my sleep and wake up in another world, as long as it is not this one"...

I googled it and it did not come up attributed to anyone, which means there is a high probability that it came out of my head which makes sense as it is fairly redundant.

There are lists of books, movies and music I want to follow up on.

There are several pages of names and phone numbers.  A good majority of them, I have no clue who the fuck they are.  I met them in the last year obviously, but the permanent ECT fog has obliterated their identities.

There is another list of ghosts from my days at EMS. I guess some may not be ghosts as theoretically they could still be alive. Most however, are people who were already dead when I got there and there was absolutely no way there was I anything I could do to mitigate their particular disasters. An interesting aspect of EMS work in Austin is that Medics are called in to get pronouncements on obviously dead people. Thats a topic for another discussion....back to Fal...

Fal is also a date book so there are a bunch of appointments written down in her. ECT, Aftercare, psychiatrists, doctors...mundane shit that make up chunks of existence.

There are little snippets on days that say things like: "fucking shit day"..."argument with fat fuck"...

I get surprised, sometimes informative, sometimes joyfully, often perplexingly. I have dug into her many times to try and jog my memory or just to find something out that I then have to contact someone to see what a particular note means.  An example: all my ECT sessions are catalogued so I know when I went. But...I did not write down who took me and I know for sure that there is one person who helped that I have lost contact with but I don't know who it is. I have a nickname but since my old phone took a giant shit on my psyche and I lost a boatload of contacts, I have not been able to figure out who it is.  It'll happen eventually...

Fal is not the only notebook I have, she is just the smallest and the one I have at my fingertips most of the time. I am so used to having her in my pocket that when I reach for her and she is not there, panic sets in. Thank the powers that be she has never been lost for any significant length of time.

Will be looking for her replacement soon so I can start 2016 "fresh"...

So, what piece of music best plays into and supports all of this bullshit?

Well, when in doubt...Nick comes to the rescue.

Consistency is obviously not my strong suit...

Ok...I keep posting cryptic silliness and not following up...I know..for the handful of people who actually read this silly bullshit, it can be frustrating.

I have been on a listless, just need to get through the day routine for several months now.

So...in an effort to hold myself accountable, here is what I need to get done within the next week:

Get June Carter (my Triumph Thruxton) registered, running right, legal etc...
Get over to Communities For Recovery to follow up on my volunteer paperwork
Finish cleaning up the hovel
Make another attempt at getting the lathes to work

I'm not going to make any pledges about consistent posts or anything like that just yet but hopefully that will be coming.

Some hopeful messages about Depression possibly: 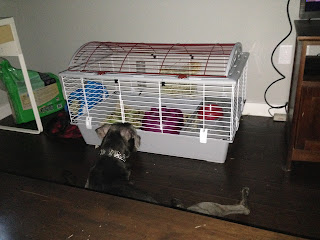 Tear Down The Walls...

I have been in a class all week. The class I am in is a Peer Coaching Class. I am learning how to maybe, possibly help other people with similar diagnoses to my own substance abuse and mental health issues to navigate the treacherous waters towards the shore.

Whats on the shore, you  may ask?. Well, after fighting off the sharks, jellyfish, piranhas and those little tiny creatures that swim into the opening at the end of one's penis, you have to get all of the gummy oil scrubbed off your skin, the plastic six pack ring cut off from around your neck, and then escape all the self righteous, smelly hippies hovering over you....

Learn from the person you are trying to help, use your own experience but do not work under the assumption that everybody is going to take the same path that you are on...