A moto buddy of mine name Russ (Space Giant is his artist name) puts on a vintage motorcycle show on every year on Father's Day. Its always a fundraiser for something. It has been Austin Pets Alive in years past but this year it was for Big Medium, the folks who put on the East and West Austin Art Studio Tours .

The name of the show is The East Side Classic.It started in 2010 and he has been doing it every year since. It is, as the name suggests, always on the East side somewhere. It has grown and gotten bigger as these types of things are wont to do but Russ is such a low key, laid back guy, its still fun, somewhat disorganized (in a good, fun way) and pretty much everyone has a blast.  I was involved in the first few years then due to the oft mentioned mental health stuff, I was gone for a couple of years and then I have been working on Father's day for the last couple of years. But this year, I said; fuck it...I'm taking Father's Day off and I am going back to the East Side Classic to help.

I have been really down and feeling extremely lonely lately, realize that I have been isolating and need to interact with people more. I recently joined a non BookPeople Book Club for this very reason. I am trying to get my work schedule changed so that I can interact with some of my peer group on Saturdays more. Not sure how that is going to work out and may be looking for a new job in the near future. 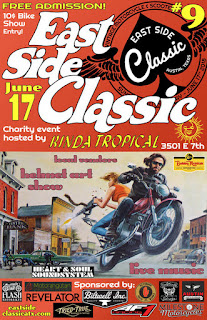 At any rate, I had a good time. Two things happened there got me thinking (or thinking more any way). Number one was that one of the Big Medium people there had a reusable drink receptacle that had an A/TCEMS Employee Association sticker on it. I quietly said to here as I passed by to get to the main East Side Classic Booth to sell t-shirts and raffle tickets that I was the President of that organization a long ways back. She immediately followed me over and started asking questions. She started there the year that I left so we never crossed paths though I am sure she has probably asked people there now about I am. She wanted to know when I was President, etc. I gave a very short very readers digest synopsis of when I was President of the Association and how it was when they got aligned with CLEAT and unionized etc. She told me she was running for President this year and wanted to know if we could meet up so she could learn about the history of  the organization,etc. I basically told her that I had said pretty much all that I was going to say, that I really did not like talking about my life at EMS. In my head, I was going "why in hell did you say anything in the first place" She said  ok but later came up to me and gave me a piece of paper with her name and email address on; asking that if I changed my mind, she would really love to sit down with me and learn more. So now I have to figure out if I want to do that or not. My core being says NO-RUN AWAY-NOTHING GOOD WILL COME OF THIS_IT WILL JUST STIR UP SHIT YOU DO NOT WANT REMEMBER...then Bob(the internal shit stirrer who lives in my brain) pops in and says, it can't hurt, your memory is so bad anyway, it's just gonna be a mish mash of shit anyway.  So I don't know. Gonna ask the Gnome about it. If I just stick to the politics of the organization back then, what can it hurt....anyway....

The second thing that happened is that a guy came up to the booth to by raffle tickets. I said howdy and so forth and he asked how I was doing. I said fine, etc... then he started asking me questions about The Critter Fixers, the non-profit I set up out where I live to help people get their dogs spayed an neutered. I gave him the latest and he thanked me for posting up pics on Instagram of the dogs and such as his life was pretty shitty right now and they made him feel better. The kicker is, I have no idea who this guy is or was. He had a vaguely familiar look of the motorcycle hipster so probably have met him at some point. But he definitely knew who I was. One of the fellow volunteers asked me who he was after he walked off and I had to tell her that I had no idea. She said, well, you pulled that off pretty well. My memory issues have made me pretty good at faking acknowledgement. Just pretending I know what is going on and winging it. But it has me worried.

I recently had a text exchange with an ex girlfriend about a trip we took to Europe together a few years ago. We had gone over to meet my folks and my brother and sister and their significant others to help my mom and dad celebrate their 50th wedding anniversary in England. After we did that, L and went across the channel and spent some time in France and Belgium. She was texting me so stuff related to Brussels that I do not remember at all...none of it. This was a magical trip and I fondly remember some specific details  but she was relating some stuff I have not memory of. Is this left over from the ECT? Did it erase some random memories ? What about that guy? How come I can't remember who he is? I'll be getting ready to text someone and all of the sudden, I cannot remember their name even though it is someone I talk to almost on a daily basis. It seems to be getting worse.

I have had more than my fair share of concussions and head injuries in years past. Is this the manifestation of that combined with the ECT? Am I heading towards a deteriorating mind in years to come...ugh....not fun thoughts today. But I feel it is important to get them out.
Posted by Unknown at 3:57 PM 4 comments:

well...its been a while

Its been a solid 18 months or so since I last wrote anything for this blog. The Dog Ranch moved out into the county just outside of a little town called Lytton Springs. There is not much there except for a  couple of convenience stores (one that seems to be closed down for now), couple of churches, a Masonic Lodge and an elementary school.

The ranch is an acre and 1/3 and includes the trailer home we live in (the dogs and I), an older trailer that is my studio (not that I have done much in it) and another workshop on a slab except the roof is mostly gone so it does not really work as a workshop any more.

The plan is to fence up around the workshop and get some chickens. One of these days perhaps. I need to get electricity into the studio because after a grass fire last summer, the electricity quit working in that building. The plan is buy a rechargeable generator and then use solar panels to keep it charged. Once again, one of these days.

I work in town at BookPeople as a manager. Its an ok job, does not pay very well, but gets me by. But I am driving in 5 days a week and lately have been in a depressive dip that leaves me very little energy for anything else.

I did manage to get a non profit started to help people around where I live to get their dogs fixed. Lots of country dogs running around fucking and creating other country dogs. Caldwell County is rife with loose dogs, the shelter in Lockhart is overrun. Have managed to get a few dogs fixed but the aforementioned energy level has kept me from pursuing much more that word of mouth at the moment.

Four dogs live at the ranch now. Luna is still there of course. She is 15 now, very grey and noticeably slower but still seems to be going ok. Polly Jean is there, she is a 8 month old puppy I got from the neighbor when I had a girlfriend living with me. She has since decamped to Montana, where she was from (the girlfriend, not Polly Jean; Polly Jean is still there, probably destroying something of mine and dragging it into the back yard. There are the twins as well; 2 Chihuahua mixes, also from next door who used to be outside dogs over there. But they were not fixed and kept wondering off and both got mauled by other bigger dogs. Rudy almost died, we spent a boatload of money on an emergency vet and that's how the non profit got started. So Rudy and his brother The Captain live there now as well. They are technically fosters but I really honestly don't see them going anywhere. Rudy has permanent damage to his throat that give him breathing problems and he could not be put to sleep so he could be fixed. They are good little guys, not really a problem having them around and they play with Polly Jean which keeps her out of Luna's space; who has no desire to play. She does referee them when they get to rough and will growl at them to get them to calm down.

This is all I have time for at the moment but I need to get out of this funk so will try to write at least once a week. There is a lot going on in my head at the moment that needs to get out, so be prepared. Some will be funny, some unpleasant, all of it honest....
Posted by Unknown at 1:05 PM 1 comment: